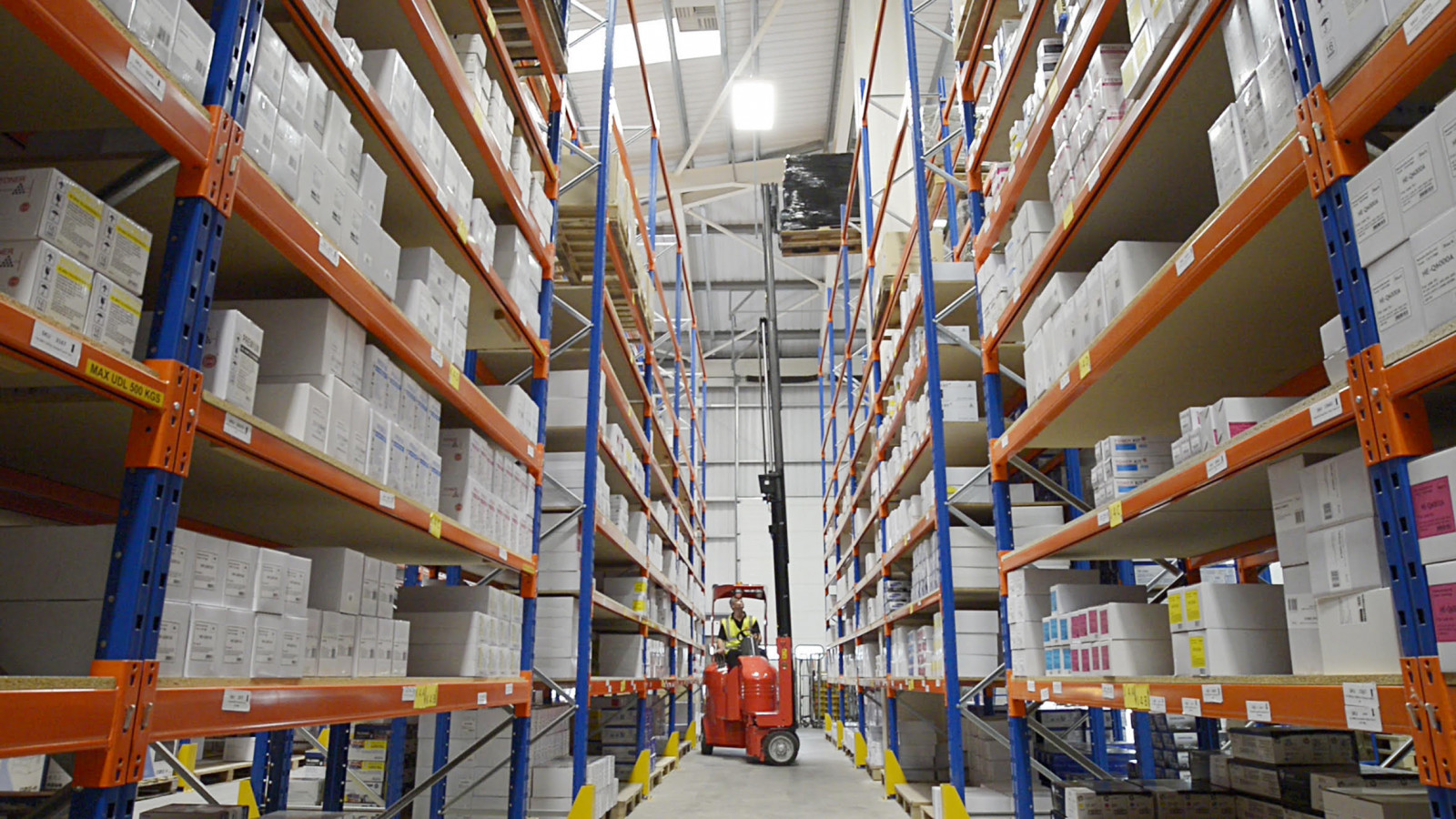 One of Made in the Midlands’ newest members has helped a retail supplier and logistics firm improve its operation 100 per cent.

H2E undertakes pallet storage warehousing along with a range of retail fulfilment and logistics services on behalf of a string of clients spread across industries as diverse as printing and pet supplies.

The company’s Crewe warehouse extends to 27,0000 sq ft, which comprises 17,000 sq ft of dedicated storage space along with 10,000 sq ft of office accommodation.

The changes to the site were implemented following a recent review of its intralogistics processes.

Kevin Over, H2E’s E-Fulfilment Manager, said: “The decision to reconfigure the layout of the store and adopt very narrow aisle methodology was driven by our need for extra cubic capacity following a period of sustained sales growth.”

Following the changes, the aisles within the Crewe store are now just two metres wide with each pallet rack filled to roof level, giving the warehouse a pallet capacity of 2,200 – a 100 per cent increase over the previous limit of 1,100 spaces.

The new racking layout has also enabled H2E to maximise the full height of the building for pallet storage.

“Our revised storage system has a top racking beam height of 7.2m which means we are now using all the 9.5m height available within the building,” said Mr Over.

“Going higher and reducing aisle widths to 2.0m has resulted in a significant increase in the overall density of the storage space available and our stockholding capacity has doubled.”

The Flexi AC1000 model articulated truck in operation at the H2E site can lift all H2E customer loads to the top beam within the very narrow aisles at the site and has been supplied with a high definition LCD CCTV system to ensure that H2E’s operators have a clear view of the load and the racking when retrieving and putting away pallets at the highest level.

Like all models in the Flexi range, the AC1000 is able to operate safely both inside and outside the warehouse. This feature eliminates double handling and means that a single Flexi will do the work of two trucks: it unloads or loads vehicles like a counterbalanced truck and operates within the aisleways like a VNA truck.

This capability has allowed H2E to reduce the materials handling equipment in operation at the Crewe store from three units to two.

“The Flexi AC1000 has allowed us to replace a reach truck which had limited use as it was unable to work outside or within the new narrow aisle configuration,” said Mr Over.

To further enhance ISO container stuffing and de-stuffing efficiency at H2E, Narrow Aisle supplied two-metre long fork attachments, which can be manually extended when required for offloading palletised products from a shipping container and retracted just as simply when the truck is required within the warehouse.

In a typical day some 500 orders are picked, packed and dispatched from H2E’s facility. Incoming pallets are offloaded from a variety of vehicles by the Flexi truck and products are booked in to H2E’s Storefeeder warehouse manager system using hand-held scanners and allocated a storage location.

The Flexi AC1000 then delivers the pallets to the racking system where bulk stock is held at higher locations before being dropped – again using the Flexi – to replenish the pick faces as and when required.

To enhance truck operator safety and the wellbeing of other warehouse staff, the Flexi 1000 features both an audible reversing warning and a visual reversing warning that projects a beam of blue light on to the floor three metres behind the vehicle to alert staff to the truck’s presence.

“The Flexi truck has allowed us to double our warehouse capacity by increasing the density of the available storage space,” said Mr Over.

“Furthermore, the addition of retractable forks, which we deploy when offloading sea-freight containers, allied to  the fact that the Flexi can be used to undertake the jobs carried out by counterbalance and reach trucks, has increased safety and allowed us to significantly improve throughput speeds.

“All operators found the converting from old reach truck technology to the Flexi AC1000 simple and they have easily adapted to the requirements of working in a narrow aisle warehouse.”

“By redesigning and reconfiguring its existing intralogistics infrastructure and using new technology and handling techniques, the company has created a highly cost effective operation that delivers attractive financial returns in double quick time.”